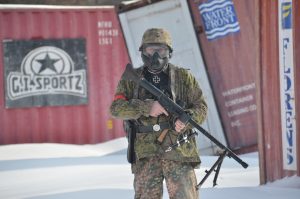 Stalingrad will fall.  Is it going to land in the hands of the Russian Army or the German powers? The choice is yours.  It has been a long winter so dust off your gear, get outside, and play our historic WWII scenario paintball game in the snow!  Join the Russian or German team today and go down in Skirmish history!

Site and contents are © 2023 Skirmish USA Incorporated. All rights reserved.